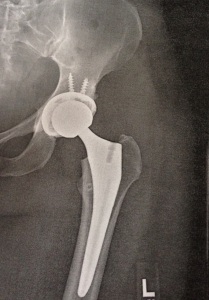 Hi! Yep, that picture is me in all my polyethylene-ceramic-titanium-ness (assuming I actually got the picture where I wanted in the post – if you haven’t noticed I haven’t mastered that quite yet). Today was my first follow up appointment and everything looks good. Had my bulletproof, waterproof bandage removed faster than you can say “leg wax” and staples taken out with only one round of Lamaze breathing. Made me regret going off my pain meds (but that first glass of wine was sooo worth it). Both the nurse and the physician’s assistant told me my incision looks great. I told them I’d take their word for it. Seriously, I’m not looking at that sucker. You can’t make me.

Yes, I’m thoroughly bugged about movement jail being doubled from 6 weeks to 12. After much whining on my part, the surgeon’s assistant said we could probably lift part of the restrictions at 6 weeks. The surgeon only said, “We’ll talk at 6 weeks,” but he smiled when he said it, so I’m hopeful. In the meantime, I shall dutifully remain in movement jail, and I am trying very hard to have a better attitude about it.

And to explain movement jail, it’s a ban on twisting, crossing my legs (not much of a big deal) and bending more than 90 degrees at the hip (BIG deal). The 90 degree thing doesn’t initially sound like an issue, but it means I can’t sit on chairs where my butt isn’t higher than my knees, I can’t use a regular toilet (only a raised seat), I can’t lean forward when I’m sitting (like to avoid dropping food on my lap when eating); it means I have to park in handicapped spots because the only way to get in and out of a car without breaking 90 degrees involves opening the car door as far as it will go; it means I have to use assistive devices to put on underwear, pants and socks, as well as to wash anything lower than my knees when showering. Now, some of these things I’m handling quite well: for example, I’ve mastered the art of picking things up from the floor when I’m too lazy to get my grabber – it’s this slow, awkward lunge-type thing. Looks weird but it works. But seriously folks, the bathroom thing is a drag. We went to a friend’s birthday party last week and we didn’t stay long and I refused to drink even a sip of anything – BECAUSE WHAT IF I HAD TO GO TO THE BATHROOM?? Honestly, toilets just should not be this big of a deal.

Ok, end of whining. As I said, I’m going to try mightily to have a better attitude about the whole thing. And they were very patient about explaining the reasoning for the 12 weeks – apparently there was indeed a pseudo tumor in the hip, but when they went to get it, the hip capsule was so “scarred down” and tight from my previous surgery that they had to do a lot of debridement and other stuff to get at it. At least that’s the way I understand it. And there was metal debris to clean out after all, but it sounds like it wasn’t too big of a deal. Reading the surgery report they gave me today made me appreciate just how much work is involved in a hip revision – and how much artistry and “feel” too. For instance, there was one part that the surgeon tried 3 different ways before he was satisfied with how it felt. It made me so grateful to have a doctor as talented as he is. And grateful, too, that I chose general anesthesia – I seriously had the option of being kind of awake, but reading all about the power tools and the pounding and other heebie jeebie-inducing activities that ensued during surgery, I’m very happy I chose the long nap.

So that’s that. I’m getting around better and better, using only one crutch at home and working up to taking that out into the real world. I can even take a few steps without crutches, but Riley says I look like the Beck Bennett adult baby character from SNL. He has politely requested that I not do it in public. Sitting is still less than comfortable for long periods of time, but at least I have crutches next to me so people don’t think I have hemorrhoids.

And now for something totally different: cancer! Yes, I almost did forget with all this crazy hip stuff that I still have cancer (damn!). And I’ll try to keep this brief because I’ve already yammered on long enough, but I had another reminder today that if I listened to all the advice I gave my children, I’d be much better off. This week I received my schedule for my upcoming scans at Mayo on April 1, which reignited my uneasiness with a decision we made at my last appointment. My oncologist had suggested at the time that we start alternating liver ultrasounds with the liver MRI’s. In all my research, MRI’s are considered vastly superior to ultrasounds in terms of detecting metastasis, but my oncologist said he was concerned about the gadolinium exposure (the contrast they use in an MRI) that someone as young as me would get over the long haul by doing MRI’s twice a year. He also said that I’m thin enough that I don’t have any fat on my liver to block a good picture on an ultrasound. So basically he called me skinny and young, and seemed to think I had a long term to be concerned about – flattery will indeed get you anywhere. I agreed, but as time went on I felt less and less peaceful about it. Well, I got a little distracted with a certain hip thing, and never got around to calling. When I received my schedule with the ultrasound on it this week, I figured that was that, too late to do anything. However, after not sleeping a few nights this week, Rich urged me to call and ask about changing it. “But it’s already scheduled! I can’t!” I whined. “Call them,” he yawned and rolled over.

So here’s the ironic thing – I’m always telling my kids this: “Ask for what you want. The worst thing they can say is no.” And yet I felt so nervous and fearful about calling and asking that I almost didn’t do it. If it weren’t for the fact that I was costing my husband sleep, I might not have gathered enough guts to do anything at all. And even when I did put on the big girl panties and call, I immediately went into apology mode the second I asked: “I know Dr. Pulido thinks I’m a total nervous Nellie,” I back pedaled, “And if it’s too late and you can’t change it, it’s fine…I know I’m being a total pest…” My oncologist’s secretary was gracious and reassuring, and an hour later a scheduler called to say they had switched the ultrasound to an MRI. Just like that. Months and months of unnecessary worry over. Now I’m generally a strong person, and I know in my heart that I should NEVER apologize for advocating for myself, and as someone with cancer I know that in fact I have to be my number one advocate, but there are times when I really need to listen to what I tell my kids: Ask for what you want. The worst thing they can say is no.

So, my friends, that’s my gentle reminder to all of you. Don’t be a chicken when advocating for yourself. Don’t assume that you’re bothering people or being a nuisance if you are simply respectfully and politely asking for what you want. The fight that you’re fearing probably won’t even happen. Just ask.