Hey there! I’m still getting my eyesight back so this will be brief, but wanted to quickly share that today went well! The tumor is indeed shrinking (more on that later), and the cancer hasn’t spread. I will absolutely post more later, but for all who have been holding their breath with me, just a quick thank you! 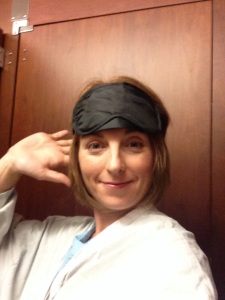 You are all awesome. I love my army!

Tomorrow we head to Mayo first thing in the morning for what will be a long day. I’m grateful, however, that they got me scheduled for all of my tests and appointments in one day (last time it was 2 days). I will be sure to post here as soon as I have eyes that can focus, but keep in mind that can take a while – ah yes, the turbo dilation. I’ve missed that. They use at least three different kinds of drops to dilate me, and then numbing drops before the eye ultrasound, leaving me with nothing to do in the waiting room but stare at the floor tiles and listen to the world’s worst musak. I mean honestly, last time I was there, the first song I heard as I nervously awaited my first test was “Nadia’s Theme.” Come on, nothing says “you’re going to die” like Nadia’s Theme – and a bad musak version of it at that. Yes, someday I will take over the Mayo Clinic, and the first thing I will do is change the music. Just to something a little less morbid.

I have, however, mastered the art of not panicking in the MRI: the eye mask. Yes, as simplistic as it sounds, I have found that if I can’t see that I’m being stuffed in a tube, I can pretend that I’m not in one. It works, don’t judge. It’s a little harder to completely zen out and go somewhere else for liver MRI’s, though. After putting the world’s biggest needle in your arm (the nurse warned me last time. Holy cow, she wasn’t kidding), they put this cage around your chest and then you have to follow their instructions to breathe or not breathe. So I can forget about sleeping, but between the cancer and my hip, I think I’m getting the hang of this MRI thing.

Speaking of my hip and/or high metal levels, there’s nothing to report there. I’m still following orders and not running, and we’ll repeat the blood tests at the end of October. If my levels are still high, we’ll repeat the MRI (MRI’s!!!! I totally LOVE those!) and then go from there.

As for the rheumatoid arthritis, my oncologist said no to methotrexate, but agreed to let me take Plaquenil. And as much as I don’t care for the side effects of prednisone, that stuff was magic. Magic, I tell you. I don’t think I really had a sense of how much function I had lost in my left hand until I got it all back. It was totally worth having to pee every five minutes. I’m serious. And since the Plaquenil takes months to start working, my rheumatologist gave me more prednisone to keep on hand in the event that I have another flare up. So while mentally I’m still trying to wrap my head around this newest addition to the three ring circus that is my health, physically I’m doing pretty well.

Which leads me to how things are going emotionally. Honestly, I’ve been doing well for the most part, and I’m feeling pretty good about tomorrow. I ended up having a liver ultrasound last month due to some funky bloodwork, and everything looked good. That doesn’t mean there’s nothing there, but it does mean there’s nothing big there. As warped as it sounds, I find that comforting. And I think it’s just going to take time to get used these scans – both the anticipation of them and the actual tests. For instance, I’ve already learned that once all my scans and tests are done and I’m finally, nervously sitting and sweating in my oncologist’s exam room, the door is going to open at least once, maybe twice, and someone who is not my oncologist will come in and do an examination. Seriously, I’m waiting breathlessly for my results, and the door moves – suddenly my heart starts beating so fast I get this buzzy feeling – but the person entering the room is merely one of my oncologist’s fellows, who can tell me nothing. They do the same exam that the nurse did and the oncologist will do, and while I understand that this is important for their education, it’s unnerving to say the least. But I’m expecting it now, which makes it a bit easier.

The other thing that makes all this easier is the massive support I’m receiving. I am ridiculously blessed with the most amazing friends and family. People who are willing to laugh with me, cry with me, pray for me, let me vent, encourage me and inspire me – it’s probably not easy walking this journey with me, but they’ve never abandoned me, never even rolled their eyes at me (or at least they’ve been kind enough to wait till my back is turned…). I feel like I have an army surrounding me.

So, army, if you feel inclined, I would welcome your prayers for tomorrow. I’m praying that the scans will show that the tumor is definitely shrinking, and that the cancer hasn’t spread. If you would add your voices and hearts to that prayer I would be grateful. Also, I’d appreciate prayers for my kids – that they will have peace tomorrow and be able to go about their classes and activities without the distraction of worry.

Thanks for taking the time to read this, and for your support! Hopefully I’ll have good news to share tomorrow!