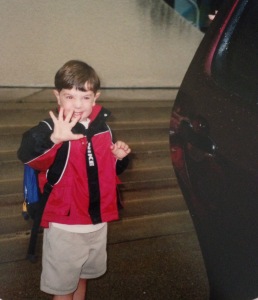 Hello! You thought I’d forgotten about you, didn’t you? Not a chance. Not. A. Chance. I love, love, love that I have this awesome army of support, people who care about me and want to stay current on the status of my health circus. I, for one, am kind of tired of it. Really. NOT that I’m asking for more excitement (that is actually my internist’s stated goal: “No new diagnoses.” I think it’s a good goal.) I just get tired of talking about it sometimes, because there are other things that are far more interesting, that’s all. So, let’s get the updates out of the way quickly, and then talk about other things, ok? Ok.

So what else has happened since my last post? Hmmmm…well, we took our oldest to college for his freshman year.

It was very hard. And I’ve been trying to figure out why I haven’t been able to write about it here. I thought initially that maybe I was just being chicken and didn’t want to feel sad like that again. To write about it is to crawl back into it, to wrap it around my shoulders and feel its weight. Or maybe, it’s the fear of coming off as shallow or overdramatic. I mean, this is a blog that started as a Caringbridge site, after I was diagnosed with cancer, for crying out loud. I could end up dying from the stupid thing, and I’m going to whine about my kid leaving for college? Seems a little warped. And embarrassing really, because with all the serious problems in the world, it seems like a petty thing to complain about. Or maybe I was hesitant because I am acutely aware of how fortunate I am to have a kid who is healthy and well-adjusted enough to leave me and go off to school. All valid possibilities, but in the end I think what’s been stopping me from writing about Riley leaving for college is simply that I felt like I needed to learn some kind of lesson from it first. A sort of moral to the story. That is, after all, how writers tend to think of stories: “What’s the point?” And it’s definitely the way I’ve processed just about every event in my life: “What have I learned here?”

So what have I learned here? That’s the problem, I just don’t know. I’ve learned that it is infinitely harder than I thought it would be (and this is coming from a woman who cried her way through her son’s senior year of high school). I’ve learned that dropping your kid off in a strange place and then getting into your car and driving away feels unnatural. So does setting the table for three people. And that without a teenage boy around, food actually goes bad in your refrigerator.

I’ve also learned that I’m not alone in this experience. In those weeks surrounding move in, we somehow cosmically found each other, these other moms and I. It’s hard to describe, but there’s just a sadness, a weary smile or slump of shoulders that seems to be an unspoken code word for “Yeah, I’m there too.” I have hugged more women I don’t know in the last few months than I have probably ever. Hugs are our secret handshake, entrance to the club of “You too? I totally thought I was messing up royally because I’m so sad about something I should be happy about.” Ok, long club name. Too long, so scratch that. But the overwhelming relief of discovering other women going through the same emotions is huge. The mom of one of Riley’s best friends called me a few days after she dropped her son off, and I could tell she was testing the waters: “So, how did move in go for you guys…?” She asked casually. I let her off the hook immediately, “It was one of the hardest things I’ve ever done, to be honest.” As I went on to tell her how I was struggling, I almost felt my hair move from the force of her exhale over the phone. “Oh good! I mean, it’s not good, but I thought something was wrong with me. I’m so glad you’re having a hard time too.” After countless variations on that conversation with multiple other moms (and a lot of hugging), I am finally reasonably certain that it doesn’t matter where we fall on the mom-o-meter, or where our kids fall on the kid-o-meter; taking your kid to college for the first time is just hard. Period.

I remember when we dropped Riley off for his first day of preschool. As he leapt out of the car and gave us a quick wave before bounding exuberantly toward the school entrance, I started to cry (you’re sensing a theme here now, aren’t you?). Rich looked at me like any husband does when his wife randomly bursts into tears, with a mix of amusement and fear. “It’s just preschool, Jen.” “I know,” I shot back, “But I feel like we just set him on a moving walkway. It’s started. And we can’t slow it down or pause it.” Rich nodded soberly and kept driving, because that is what you do when your wife has completely lost her mind. That, and stop for a latte, which he also did. He’s a smart man.

Fast forward 15 years or so, and the moving walkway has indeed failed to stop or slow. After we got him all moved into his dorm and had made the requisite Target run for things we had forgotten and/or didn’t realize he needed, we took him out for dinner and then finally dropped him off back at his dorm. We said our goodbyes (and by the grace of God I mostly managed to hold it together), and Rich and I got into the car. As I watched Riley walk toward the dorm entrance, I couldn’t help but see that joyous preschooler, oh-so-ready to begin the next, big thing. And that damned, invisible moving walkway, carrying him toward it.

And here’s the most maddening thing about all of this: it’s good. I can’t indulge in even the teensiest sense of tragedy, because what’s happening is, in fact, wonderful. My kid gets to go to college. He worked hard and got into an excellent school that will prepare him for a bright future. And he’s doing great, by the way. Still trying to figure out how to simultaneously be an engineering major and have a life, and still texting me with questions every time he does laundry, but he’s learning and growing. He’s figuring out who he is and how he is, what matters and what doesn’t. He’s well on his way to becoming his adult self, and he is precisely where he needs to be to make that happen.

But it’s hard having him gone, I’m just going to say it. Technology is a wonderful thing, and it is largely responsible for the fact that I’m (outwardly) sane. But I miss having him around. My friend Sara perhaps said it best: “Really? So this is our reward for raising good kids? They leave us?” She went on to eloquently describe the bittersweet aspects of sending a child to college, but I, of course, appreciated the sass more. We’ll save eloquent for another post; today, I’m just being real. And I really miss my kid. No technology can replace just having him here, drumming on everything, making jokes, playing with the dogs, bugging his sister, scrounging though the fridge with a mildly frustrated, “What can I have to eat? I’ve had everything!”

Don’t get me wrong, I haven’t been reduced to sitting in a corner in the fetal position, rocking back and forth and sucking my thumb (that was only the first two weeks, silly). Rich, Tessa and I have settled into a new rhythm now, just the three of us. And Riley is very good about staying in touch, so it’s not like he’s out of our lives. It’s just different.

Maybe that’s what I’ve learned: that sometimes the good changes can be hard too. We work so diligently at making the best of crappy situations, perhaps it’s surprising when we find ourselves challenged by something that is actually good.

And it is good, I know that. I’m grateful every day for both of my kids – the one I have to text, and the one I get to annoy in person. Missing people is the price we pay for loving them so deeply. I know I wouldn’t love my kids any less in order to be spared the pain of them leaving, but that doesn’t make the process any easier. Change can be difficult, even when it’s for a good reason.

As always, thanks for joining me on the journey. It’s nice to have company. Onward and upward, friends.