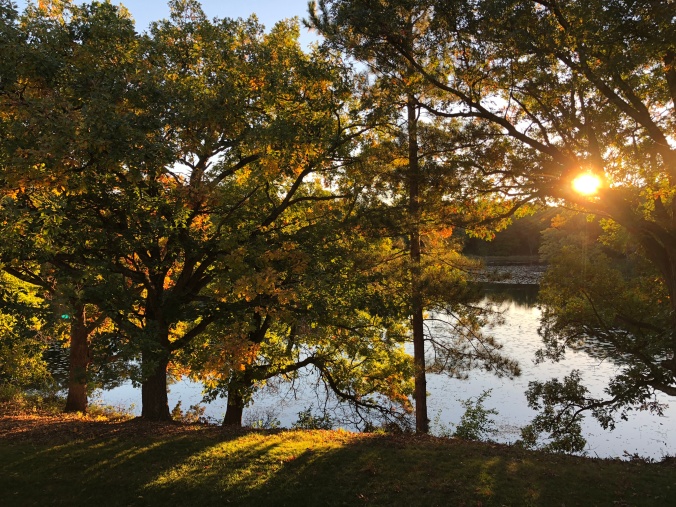 First and foremost, let me reassure you (and you need to imagine this in a Monty Python voice or it just sounds weird) I’m not dead yet! Because I realize that when I go too long between posts (like, say, a full year), people worry that my health has taken a turn for the worse. It hasn’t.

No, I just let it go, inadvertently at first (“Oh! I’ve been so busy I totally forgot to blog!”), and then with a resigned acceptance (“Screw it, I’ll have time to blog in the fall”). And now… It’s fall! But as I wrote about in my post, “The Underwear Always Wins,” (June 9, 2017) well… the underwear always wins (sorry, I’ve got nothing new to add to that, it still does). I allowed myself to get caught up in the “stuff” of life and didn’t write.

And as my youngest child’s senior year of high school, it was kind of a big year for all of us, with a lot of “lasts.” I would love to tell you that I intentionally decided, in some super chill, zen-like way, to put other things aside in order to be fully present during this important year. No, it was more like grace. Once I realized I had let the blog go, I had a choice: I could beat myself up over it, or I could be gentle and decide to go about things a different way. I kept notes on things I wanted to write about, a rambling, stream-of-consciousness document on my iPad called “Blog Thoughts.” Coming back to it, I was at once amused and irritated at the cryptic nature of some of my jottings…

…the dog barfed and now I can’t find my slippers…

What was I even talking about?? More to the point, why were these things amusing/upsetting/important and ultimately blog-worthy? No idea. So we’re starting fresh here, people.

Speaking of starting, as I get back to this, I am reminded of the first rule of sitting down to write: it doesn’t matter if it’s been a day, a month or a whole freaking year – when you sit down to write, EVERYONE will suddenly want to talk to you. It’s just a fact. Your popularity will know no bounds. My husband comes out of his office, deciding that now – yes, right now! – is the time we absolutely must talk about _____, my kids both text me, people I haven’t spoken to in ages call me. In fact, I just got an automated phone call from the Mayo Clinic reminding me of my upcoming appointment – and I’m pretty sure that in five years I’ve NEVER gotten one of those calls from them before. It is a thing, and I’m sure you all know that. Whatever your project or task, YOU KNOW that the second you start it is the second you become the most sought after person in the world. Yet we persist…

Speaking of Mayo (and I do so love speaking of Mayo…NOT), I have scans coming up in two weeks. Now, I’ve been doing this whole cancer dealio long enough to know that I get just a wee bit nuts in the few weeks before scans, it’s just a fact. The nuttiness varies from time to time, but however it shakes out, I just know that I will never be the best version of myself in the weeks before scans. I’ve tried to fight it, but my efforts have been in vain as I am always just a teensy bit nuts. I’ve just accepted it now. This time, rather than being excessively short-tempered or weepy (my trusty go-to’s), I’ve simply been a space case. If I can hold it, I can forget it. My jacket, my phone, my shoes (true story)…everything of value will get left somewhere these next two weeks, apparently. It’s fine, I guess I shouldn’t be so tied to material things, right?

But no matter how it makes itself known, scanxiety is a thing. Angry, weepy, forgetful – it is what it is, but the one non-negotiable pre-scan practice for me is always Preparing to Hear Bad News. Because as I’ve said before, there’s this warped part of me that feels like if I come into these appointments too cocky or too casual, then BAM, that’ll be when I’m told it’s metastasized and I’m going to die. And don’t tell me it’s irrational – I KNOW darned well it’s irrational, and probably more than a little morbid. But it’s my thing, I’m owning it. I have to rehearse in my head what that news would sound like and feel like. I have to hold my own mortality up before my face and examine it from all angles. It’s become almost a pre-scan ritual for me: “And now is the part where we contemplate death…” While it may sound ridiculously morbid, the odd thing is that it’s actually the opposite. In fact, I would argue that it’s a valuable tool for anyone, cancer fighter or not.

Once I had finished my initial treatment and was settling into life as a long-term cancer-fighter-type-person, I realized that my ideal state exists somewhere between forgetting and remembering, between hope and fear. Hope, because – well, HOPE. I want to always be someone who sees glasses as half full, and believes in miracles and happy endings. But fear…a little bit of fear can be good too. Not so much fear that I’m paralyzed, but rather enough to put me in motion. Because I don’t ever want to forget for a second that this whole ride could end sooner than I’d like, and I want to live my life as someone who gets that. Someone who doesn’t wait to do all the things and love all the people, someone who isn’t waiting to live. It’s like that “Live Like You Were Dying” song – only minus the riding a bull named Fu Manchu part (I don’t care if the bull is named Sparkles, that just sounds terrifying and is certainly not on my bucket list. But to each their own..)

The point is, I’ve come to see my scans – and all the weird scanxiety around them – as an opportunity to check in with myself, a kind of personal performance review. How am I doing at this life thing? Am I living like I mean it? Or have I forgotten that life is fragile? If I get bad news, am I going to have regrets about the way I’ve spent my time?

On the day I was diagnosed, I spoke with my pastor. It had been just a few hours and I was only starting to gather myself.

“So what are you feeling right now?” He asked.

“Disappointed,” I snapped back.

He chuckled, clearly not expecting that response,  “Ooookay, do you want to explain that?”

So that’s the focus of my pre-scan contemplation of death ritual these days. If I get bad news, am I going to be disappointed? Or will I be able to look my mortality in the face and say, “Ok, it stinks that I’m leaving this joint early, but I can say with absolute certainty that I’ve had a pretty solid run here.” If I can’t answer like the latter, then my performance review tells me I’ve got some work to do.

I share this with you in case you’d like to join me in this fun little exercise (“Oh Jen, you have such a morbid idea of fun, count me in!”). You can skip the bad elevator music and getting stuffed in an MRI tube, but the personal performance review isn’t a bad way to check in with yourself, I’ve found.

For my part, among other things, I’m going to work on writing more regularly. Because I have a better story than “she had cancer.”